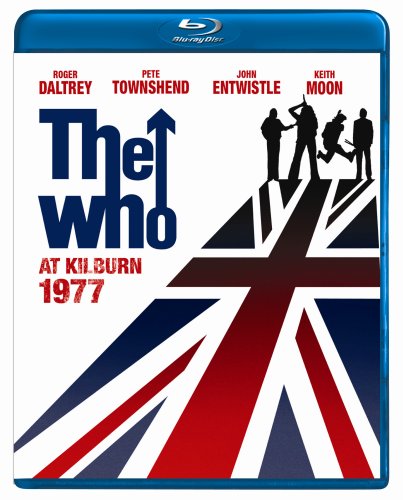 One of the greatest rock bands of all time, The Who defined modern music for the past four decades. Now after years of anticipation, some of their most unforgettable moments can finally be experienced with THE WHO: AT KILBURN: 1977. Newly mastered in high-definition with state-of-the-art sound for a spectacular home theater experience, the December 15, 1977 Kilburn show at the Gaumont State Theater in North London was recorded before a select audience for Jeff Steins hit film about The Who, The Kids Are Alright, but only a few brief selections of what would prove to be legendary drummer KEITH MOONs public swan song were ever seen in the finished feature. Captured on 35mm with six cameras and a 16-track audio recorder, the complete Kilburn show features Moon and the rest of the bands classic line-up -- singer ROGER DALTREY, guitarist/singer PETE TOWNSEND, and bassist JOHN ENTWISTLE--in top form with many of their biggest hits. Also included in this release is another never-before-seen show and one of the bands favorites, their 1969 London Coliseum performance, which comes with a wealth of additional bonus tracks and boasts the first-ever full live recording of their groundbreaking rock opera, Tommy. With a total of 29 classic The Who songs, this pivotal release has long been at the top of rock fans wish lists and has been regarded as a lost holy grail for followers of The Who since Moons passing. This release will occur in conjunction with major, high-profile airings of the Kilburn show as a Fall 2007 pledge drive title with heavy promotion on PBS. Currently on tour through November 2008, THE WHO have been inducted into the Rock and Roll Hall of Fame and the UK Music Hall of Fame and won the first annual Freddie Mercury Lifetime Achievement in Live Music Award and a GRAMMY Foundation award for creative contributions of outstanding artistic significance to the field of recording. Their albums Tommy, My Generation and Who's Next have been inducted into the GRAMMY Hall of Fame. Track Listing: Disc One: Kilburn Songs: " I Cant Explain," "Substitute," "Baba O'Reilly (Teenage Wasteland)," "My Wife/Going Mobile," "Behind Blue Eyes," "Dreaming from the Waist," "Pinball Wizard," "I'm Free," "Tommys Holiday Camp," "Summertime Blues," "Shakin' All Over," "My Generation," "Join Together," "Who Are You?," "Won't Get Fooled Again." London Coliseum Songs: "Heaven and Hell,"" I Can't Explain," "Fortune Teller," "Tattoo," "Young Man Blues," "A Quick One While He's Away," "Happy Jack," "I'm a Boy," "I'm Free," "Tommy's Holiday Camp," "See Me, Feel Me," "Summertime Blues," "Shakin All Over," "My Generation." Disc Two: 70 minutes of rare Coliseum bonus tracks and extended versions including the first-ever live recording of the rock opera Tommy: "A Quick One While He's Away," "Overture," "It's a Boy," "1921," "Amazing Journey," "Christmas," "Acid Queen," "Pinball Wizard," "Do You Think It's Alright," "Fiddle About," "Tommy Can You Hear Me?," "There's a Doctor," "Go to the Mirror," "Smash the Mirror," "Miracle Cure," "Sally Simpson," "Tommy's Holiday Camp," "I'm Free," "We're Not Gonna Take It.